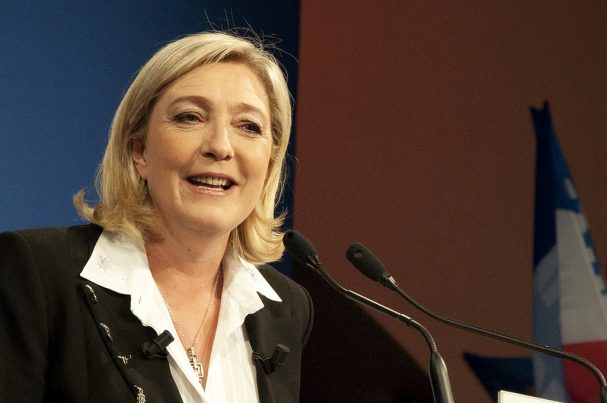 The globalists within the French government are obviously concerned that presidential contender Marine Le Pen, who has a “France first” agenda like Donald Trump had an America-first agenda and who is rising in the polls because they had her party’s office raided by police recently.

As reported by The Guardian, French cops invaded and searched Le Pen’s Front National offices in Paris over alleged “fake” jobs pertaining to the illicit use of European Union funds to pay the salary of a bodyguard and an additional assistant.

Investigators from Brussels say that Le Pen paid Thierry Legier, her bodyguard, €41,500 ($43,738) between October and December 2011 – more than five years ago – after claiming falsely that he was a parliamentary assistant for the EU.

In addition, investigators say that Le Pen gave some €298,000 ($314,072) between December 2010 and 2016 to Catherine Griset, her assistant who is based in France. According to reports, in order for someone to actually qualify as a parliamentary assistant, they must be physically working out of one of the EU’s offices – in Brussels, Strasbourg or Luxembourg – and live near the office he or she is working from. (RELATED: After Paris Attack, Now Is The Time To Get Out Of Your City If You Can)

Interesting how suddenly – after these ‘crimes’ allegedly occurred over the course of years – that Le Pen would be investigated after she became a frontrunner in France’s presidential campaign.

“I formally contest this unilateral and illegal decision taken by political opponents … without proof and without waiting for a judgment from the court action I have started,” she said in a statement, as reported by The Guardian.

Clearly, the globalists are looking to hurt Le Pen, 48 – in terms of her reputation, as well as financially. The European anti-fraud office, Olaf, is demanding that she repay all of the funds, which amount to €340,000 (about $358,337). She has said she won’t do it, so it is being deducted from her salary as a French MEP.

A statement from her party said that the French police raid was little more than a bid to “disturb the smooth running of the presidential campaign and to sink Marine Le Pen at the moment her campaign is making strides with voting intentions.”

Indeed, as reported by Bloomberg, Le Pen is now leading her first-round opponents, 27 percent to 20 percent apiece for Emmanuel Macron, an independent, and Francois Fillon, a Republican. Her winning message? Security – one of the same messages that led tens of millions of Americans to support Trump.

France has been the site of more Islamic terrorism than any other European Union member. That should have been anticipated, given that the Muslim population in France – which has taken over entire neighborhoods – is 7.5 percent of the French population, or about 4.7 million, according to the Pew Research Center. Only Germany has more – 4.8 million, though it’s only about 5.8 percent of the population of that country.

Le Pen has been rising in popularity in France with each new terrorist attack. From the ISIS-inspired murders of Charlie Hebdo staff to the bloody attack in Paris in November 2015 to the Bastille Day attack in Nice in August, more and more French citizens are turning to the one candidate who they believe have their best interests, and the interests of France, in mind. (RELATED: The Health Ranger Report: ISIS Is Coming To America — How Prepared Are We?)

Le Pen is gaining from her tough stance on the disturbances that flared up across France last week during mostly peaceful protests against police brutality. The National Front leader is tapping into voters’ unease after more than 200 people were killed in terrorist attacks in just over two years and those sentiments were stirred up again this month when a soldier in the Louvre fired five shots at an assailant armed with a machete and crying “Allahu Akbar.”

“It’s all about security,” Bruno Jeanbart, director of OpinionWay, told Bloomberg. “Le Pen is benefiting from the fact that they’re all busy either bickering or unable to disentangle themselves from their many controversies.”

In the U.S., voters definitely responded to Trump’s pledges to shore up border security and end the Obama administration’s flooding of the country with refugees from terrorism-sponsoring countries whose governments have either failed or are in the process of failing.