Syrian chemical attack has all the signs of a false flag operation, warns Ron Paul 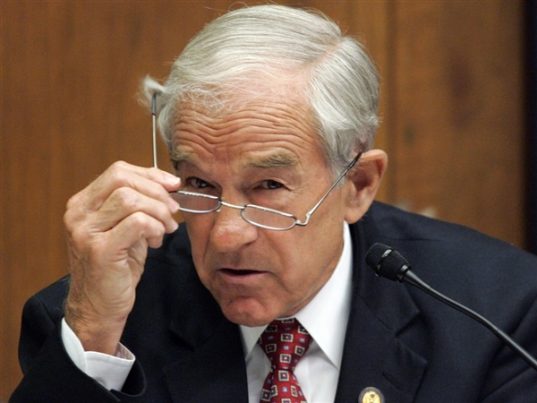 To many people watching the events in Syria unfold before their very eyes, Bashar Assad looks guilty, ruthless, and unremorseful. As everybody knows by now, earlier this week the Syrian government allegedly used sarin gas to kill dozens of innocent people, including many of its own citizens. Sarin is a chemical substance that targets the nervous system and renders the muscles that control breathing defective. It is a terrible and tragic way to go, and if Assad was, in fact, responsible for this attack on his own people, then he is a monster.

Ron Paul, former politician and libertarian icon, disagrees with the idea that Assad was responsible. In fact, Paul used part of his podcast “The Liberty Report” on Wednesday to declare that the chemical attacks against the people of Syria are a false flag. “Before this episode of possible gas exposure and who did what, things were going along reasonably well for the conditions,” Paul said. “Trump said let the Syrians decide who should run their country, and peace talks were making out, and Al Qaeda and ISIS were on the run.”

The former Texas congressman went on to say, “It looks like, maybe, somebody didn’t like that so there had to be an episode, and the blame now is we can’t let that happen because it looks like it might benefit Assad.”

Still, many other Americans on both sides of the political spectrum believe that Assad is nothing more than a violent, ruthless dictator. Bashar Assad has slaughtered innocent people for years, using government agents as pawns to gun down people in the streets, murder innocent babies inside of hospitals and carry out numerous chemical attacks. Contrary to what Ron Paul thinks, perhaps its time that we as Americans put an end to the relentless violence once and for all.

Since our founding, America has been unique and special. Beginning with the signing of the Declaration of Independence, through the Civil War and into the twentieth and twenty-first centuries, our country has stood out from all other nations on earth. We have a system designed for the people, not for a governing body. We put an emphasis on liberty, not centralized authority. We have roots based on the Enlightenment and Judeo-Christian principles. All of these things point to the fact that America is exceptional. Calling the United States the greatest nation earth is not just an opinion; it is a reality that is based on truth and historical context.

With that being said, America also has a unique role to play on the global stage. In the face of evil, we have a responsibility to act, not because we want to turn into a global police force, but because there simply is no alternative. History has taught us that when America stands idly by in a non-interventionist fashion, evil gains a foothold.

For proof, all one has to do is look at what has happened to Iraq in recent years. When the United States pulled its troops out of the region, it ultimately created a vacuum that gave rise to radical Jihadists and the Islamic State. This has led to the slaughter of hundreds of innocent people, and the carnage is showing no real signs of slowing down.

Spider-man’s uncle got it right – with great power really does come great responsibility. By launching the tomahawk missiles Thursday night and destroying Syria’s airfield, President Trump demonstrated more to the world than America’s military might. He showed that when the world is threatened with darkness and humanitarian crises are occurring on a large scale, the United States will no longer sit on the sidelines and allow it to happen. Those days are over.