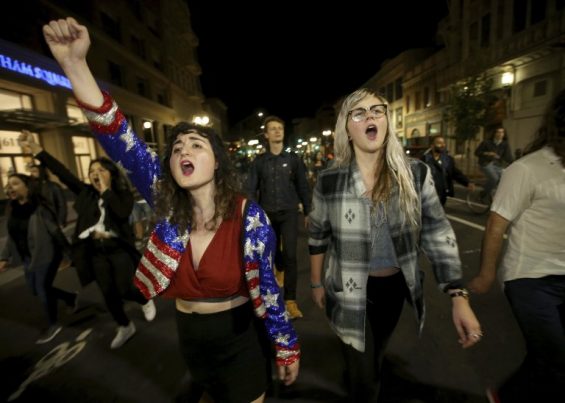 Proving once again that it really is the Terrorism Party, Democrat operatives are uniting in protest of Republican town-hall style events in a nationwide bid to oppose President Donald J. Trump’s agenda and make the country as ungovernable as possible.

As reported by the Washington Free Beacon, one of those groups – CAP Action – was founded by Clinton sycophant and longtime Democratic operative John Podesta, who also spent some time as an advisor to former President Barack Obama while he was still in office.

The group’s formal name, the Center for American Progress Action Fund, is a Left-wing group founded by Podesta, Hillary Clinton’s campaign manager, which advocates for Venezuela-style “reforms” that would include complete government control over the economy and our lives. CAP Action is now partnering with a similar organization, the Town Hall Project, to disrupt Republican town halls but not those held by Democrats. Suffice it to say, there is no similar Right-wing organizational effort to have people show up just to shout down Democratic lawmakers and deny them the opportunity to speak to real constituents. (RELATED: George Soros-Financed Groups Scheme To Stop Trump’s Temporary Refugee Halt Order)

“So today I’m excited to announce the partnership between Town Hall Project and the Center for American Progress Action Fund,” said an email from the Town Hall Project. “With CAP Action amplifying our town hall event research, we can even better ensure that all Americans have the tools needed to channel their organic energy to ensure their voices are heard and their elected representatives held accountable.”

“Let me emphasize that this is collaboration towards a common goal,” the email went on. “Town Hall Project is 100% independent and will never waiver [sic] from our core values of grassroots research and citizen engagement. While we stay true to ourselves—and to supporters like you—we know the way we win is to build a big coalition of progressive groups: big and small, new and old, online and offline, all working together to fight back.”

Except, that’s not really what the goal is. The goal is to defeat Republican efforts to work with the president to enact a right-leaning agenda for the country – like most voters want, as evidenced by the fact that the GOP holds majorities in both congressional chambers and now has the White House.

The near-term objective is to have far-Left supporters show up at Republican town hall events to shout down lawmakers on stage, which will then get a lot of press from a compliant media and give the impression that the country is overwhelmingly against the GOP and President Trump. But it’s a mirage, just like the phony polls that show Trump’s support tanking just weeks after he won an amazingly large electoral victory over the hapless Hillary Clinton.

This “resistance” to Trump and Republicans is rooted in the fact that the modern Democratic Party has been taken over by far-Left Marxist revolutionaries whose ultimate goal is ruling, not governing, America – and by any means necessary.

As Daniel Greenfield, a Shillman Journalism Fellow at the Freedom Center, noted recently, the divide is so great between liberal “progressives” and conservatives that there is no hope of reconciliation:

The left’s endgame is a totalitarian state. Its “moderates” pursue one by peaceful means only so long as they are allowed to hijack the system. When an election fails to go their way, the radicals brandish it as proof that the system has failed and that violent revolution is the only answer.

It’s also apparent in Congress. Take the Senate’s recent action in confirming Judge Neil M. Gorsuch to the Supreme Court; in order for it to happen, Republican Senate Majority Leader Mitch McConnell of Kentucky had to change the rules ending the filibuster for high court nominees after most Democrats flat-out refused to support him, despite the fact that he was imminently qualified and even though most Republicans supported Obama’s far-Left nominees, Elena Kagan and Sonia Sotomayor. (RELATED: Trump White House Releases Revolutionary Plan To “Drain The Swamp” And “Rebuild” The Federal Government)

For the budget, Republicans will have to figure out a way around planned Democratic obstructionism and threats to shut down the government if certain spending provisions are in it.

As for the Trump administration, there are still dozens of vacancies yet to be filled because Democrats are purposely dragging their feet on allowing nominees to be voted on by the full chamber.

It’s all about blocking Trump and the GOP, all the time, period.

“The Democrats have become a terrorist party. And their commitment to a radical revolution has plunged our political system into chaos. The left is now exactly where it wanted to be,” Greenfield notes.