John Podesta gets DESTROYED by Maria Bartiromo over his RUSSIA connections 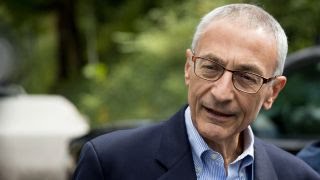 One of the most underreported stories of the 2016 election (as in, the so-called “mainstream” media all but ignored it) was Hillary Clinton campaign manager John Podesta’s extensive financial ties to Russia. But since her loss to Donald J. Trump, all the rage in the establishment media circles has been tying the current president to Russia, who, we are endlessly told, “colluded” with the Kremlin to steal the election.

Donald Trump Jr.’s meeting with a Russian lawyer initially thought to be associated with Moscow aside, there is no evidence whatsoever to support any “collusion” allegations. But there is plenty of evidence to support the contention that Podesta is up to his eyeballs in connections to Russia, and Fox Business Network’s Maria Bartiromo had it out recently with Podesta on her program over those connections.

In recent days, Podesta appeared before House investigators looking into the so-called Trump-Russia collusion and other Moscow-directed efforts to allegedly disrupt the outcome of the 2016 election. He met behind closed doors with members of the House Intelligence Committee, which is leading one of the investigations into Russian meddling. Podesta’s emails were either hacked or stolen, along with Democratic National Commitee emails, and summarily leaked by Wikileaks and Guccifer 2.0, causing embarrassment and consternation for both the DNC and him personally.

Bartiromo noted that shortly after Podesta joined the firm, a Russian entity that was directly funded by the Kremlin invested $35 million in it, and Podesta himself was given 75,000 shares — which she went on to note he failed to disclose after he became involved in the Obama White House towards the end of 2013, which is before he left to become Clinton’s campaign chief.

“Maria, that’s not true,” Podesta countered. “I fully disclosed and was completely compliant” with disclosure requirements, adding that he divested his holdings beforehand.

Bartiromo pressed him on that point, however, asking where he divested those holdings, saying many people believe he “divested it with” his “adult children.”

Stammering, Podesta tried to explain that his divesture followed advice he was given by White House counsel. “I was fully complaint and fully transparent,” he said.

Then the conversation turned heated. Podesta accused the host of “picking through his emails” that were released by Wikileaks to falsely accuse him of owing shares in a Russian company. Bartiromo countered by repeating the fact that the company on whose board he sat — and received those shares — was “backed by the Kremlin.” (RELATED: Obama’s cybersecurity czar: ‘NO evidence Russia hacked election.’)

Podesta said that the company was an American firm, and that he never received any shares “in a Russian company,” obviously parsing words.

“It’s been widely reported that that company was backed by the Kremlin, and that they gave you 75,000 shares, that you failed to disclose as you headed into the Obama administration,” the host shot back.

“Maria, you can keep leveling the charge, it is not true. They didn’t give me anything,” Podesta said. “They [the Russian government] had a small investment in the company I was on the board of.”

When Bartiromo pressed again about the shares, citing the fact that it has been “widely reported” he received them, Podesta countered that she was getting bad information from right-leaning sites like “Infowars.”

“No, I’m not, no I’m not,” she interrupted. “This is Politico, this is The New York Times, this is The Wall Street Journal, that’s what I’m looking at, John.”

“Then there’s Hillary Clinton, of course we know, who got $100 million from Russian companies after she allowed that Russian company to acquire 20 percent of the U.S. uranium,” she shot back. “So, the point I’m making here, John, is that there’s much deeper ties to Russia on the Democratic side than there are on the Republican side, and it’s just a head-scratcher that this has been taking more oxygen out of the room over Trump, when in fact it has been your team that has been in bed with the Russians.”

The full interview is below.