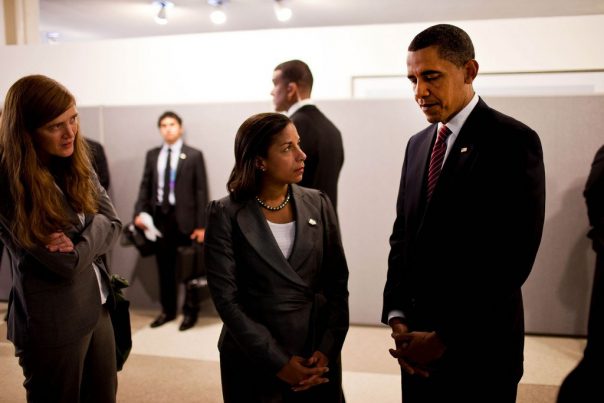 In a revelation that is sending shock waves throughout the government and political circles, former Obama National Security Advisor Susan Rice has been identified as a former administration official who asked for the identities of U.S. persons included in raw intelligence data on “dozens of occasions” which connect the campaign and transition of Donald J. Trump, U.S. officials familiar with the issue told Bloomberg News.

The news report noted that the pattern of her requests was unearthed through a National Security Council review of federal government policy related to “unmasking” the identities of people in the United States who are not subjects of intelligence community electronic surveillance, but whose communications with people under watch are nonetheless collected incidentally.

Under normal circumstances, the identities of those U.S. persons are redacted from intelligence reports and summaries, often appearing instead as “U.S. Person One” or something similar. (RELATED: Intel official who ‘unmasked’ Team Trump ‘very high up’ – report)

The National Security Council’s senior director for intelligence, Ezra Cohen-Watnick, was conducting the review, according to two U.S. officials who spoke with Bloomberg View on the condition of anonymity because they were not authorized to discuss it publicly. In February Cohen-Watnick discovered Rice’s multiple requests to unmask U.S. persons in intelligence reports that related to Trump transition activities. He brought this to the attention of the White House General Counsel’s office, who reviewed more of Rice’s requests and instructed him to end his own research into the unmasking policy.

The reports Rice obtained were summaries of conversations that had been surveilled by U.S. intelligence agencies and mostly consisted of foreign officials talking about the Trump transition. In some cases, there was direct contact between Trump Team members and the foreign officials under surveillance.

Bloomberg News reported that one U.S. official who is aware of the contents of the reports said they included “valuable political information on the Trump transition such as whom the Trump team was meeting, the views of Trump associates on foreign policy matters and plans for the incoming administration.”

“I know nothing about this,” she said, adding, “I was surprised to see reports from Chairman Nunes on that account today.”

Based on the Bloomberg report, that claim does not appear to be accurate.

Washington Post reporter Bob Woodward said during an interview with Fox News last month that whoever is responsible for the unmasking could very likely face legal repercussions. (RELATED: Politico Just Proved There Was No Trump-Russia “Collusion” To Steal The Election)

“You can learn all kinds of things from diplomats gossiping, because that’s what occurs. Under the rules, and they are pretty strict, it’s called minimization. You don’t name the American person who is being discussed,” he said, as reported by the Washington Examiner.

“But the idea that there was intelligence value here is really thin,” Woodward added. “It’s, again, down the middle, it is not what Trump said [about Obama ‘wiretapping’ him], but this could be criminal on the part of people who decided, oh, let’s name these people.”

Making that point clear, Woodward – of Watergate fame – noted further that “under the rules, that name is supposed to be blanked out, and so you’ve got a real serious problem potentially of people in the Obama administration passing around this highly classified gossip.”

The House and Senate intelligence committees are continuing their investigation into Trump surveillance and any potential ties the Trump team had to Russia, the latter of which has been bandied about since November by the establishment press and Democrats without any proof.

It’s important to note that while Bloomberg is not reporting that Rice herself was directly responsible for the unmasking, clearly – based on the NSC’s findings – she very well may know who did, if it wasn’t her. Still, her involvement puts former President Obama right in the thick of this; to believe he had no idea that his own national security advisor was requesting the identities of Team Trump members is ludicrous.