If Trump is a Putin stooge, then how come Russia benefitted so much during the Obama presidency? 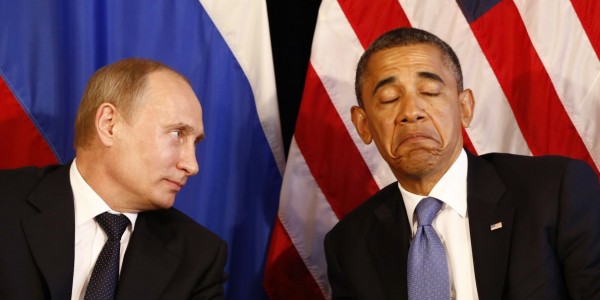 Marxist Democrats who are still ticked off that a reality TV host and billionaire businessman could best their chosen successor to Barack Obama are continuing to advance the fake narrative that President Donald J. Trump and Russia “colluded” to “steal the election” from Hillary Clinton.

As reported by The National Sentinel, this loony conspiracy theory continued Monday night on the Fox News program “Tucker Carlson Tonight,” in which Rep. Seth Moulton, D-Mass. – who once called Trump staffers “minions” in the pay of Moscow – implied that despite Trump’s attack against Syria, a client state of Russia, last week, the president and the Kremlin leader remain in cahoots.

“One exception does not prove the rule,” Moulton countered, suggesting that the Syria bombing by Trump may have been just a one-off aimed at making it appear as though Trump was opposing Putin. “This could very well be an attempt by the administration to get out from under the claim that it’s been colluding with Russia.

“There are a lot of other things that Trump has done that seem to be playing right into the hands of Putin. We ought to just find out, Tucker,” he said. (RELATED: Obama Administration Abuses Of Foreign Intelligence May Actually Have Begun BEFORE Trump)

It doesn’t get any more conspiratorial than this.

And yet, why wouldn’t Democrats attempt to tie Trump to Putin’s Russia – given all of the genuine collusion between Moscow and the Democratic regime of President Barack Obama. Indeed, this week – in condemning Trump’s Syria attack – Putin even repeated a Democratic talking point to complain that the attack was uncalled for.

“It reminds me of the events in 2003 when U.S. envoys to the Security Council were demonstrating what they said were chemical weapons found in Iraq,” Putin told reporters on Tuesday. “We have seen it all already.”

As for outright collusion, there is no doubt that the Obama administration – and the former president himself – was doing all it could to forward Moscow’s agenda over that of the United States:

— Prior to the 2012 election Obama, unaware there was a hot mic, promised then-outgoing Russian President Dmitry Medvedev that he would “have more flexibility” after the election to work with incoming President Vladimir Putin on reducing the U.S. nuclear arsenal. Is this not something Russia would support?

— The Obama administration ignored Russian aggression in Georgia in 2008 (prior to Obama’s victory) and in Crimea (well after Obama’s victory), doing nothing but issuing empty warnings. The Crimea annexation by Russia from Ukraine was particularly galling because the U.S. agreed to support Ukraine militarily if it ever came under assault, in exchange for Kiev surrendering its Soviet-era nuclear weapons at the end of the Cold War. In fact, Russia made the same agreement but then Putin broke it – without repercussions. Obama then refused to provide Ukraine with defensive weapons. Did all of this not serve Russian interests?

— Obama made the nuclear “deal” with another Russian client state, Iran – a deal that will eventually lead Tehran to build nuclear weapons and the means to deliver them. Who benefitted? Russia, which is providing Iran with nuclear technology (for a price). (RELATED: Russia, Iran lay down gauntlet following Trump strike in Syria)

— And let’s never forget, Hillary Clinton’s State Department approved a deal allowing Russia to obtain 20 percent of strategic U.S. uranium reserves (the key element in the manufacture of nuclear weapons) as tens of millions of dollars flowed into her foundation. Big advantage goes to Russia.

“Put all of this together, and it’s impossible to conclude anything other than that Obama was a Russian stooge, and not out of any nefarious deals, but out of his own naiveté and weakness,” Lowry writes.