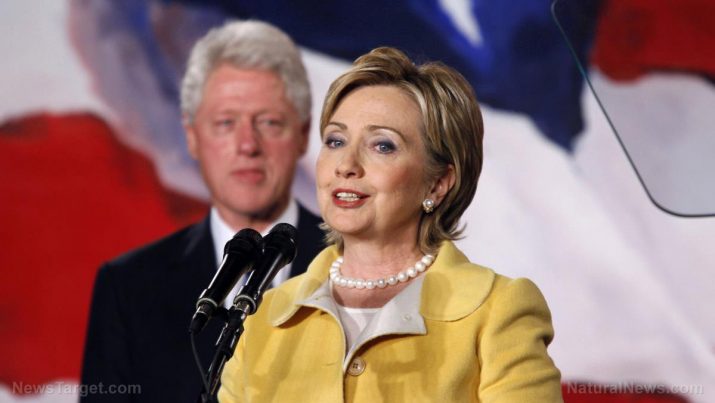 The festering, incestuous Washington, D.C. swamp is disgusting indeed, but its filthy, politically compromised inhabitants do know how to take care of their own, be certain about it.

That includes “special counsel” and former FBI Director Robert Mueller, who — according to documents recently unearthed — behaved much like his successor, James Comey when it came to dealing with Bill and Hillary Clinton.

As noted by Infowars, the FBI Vault contains “ample documentation that then-Attorney General Robert Mueller…closed several different criminal investigations into Clinton Foundation activity, without producing any recommendations for criminal indictments.” (Related: Hillary Clinton opposed sanctions on Russia and her husband Bill raked in $500,000 for giving a speech in Moscow.)

During his term as the head of the FBI, Mueller’s bureau failed to act on repeated “pay-to-play” accusations involving Frank Giustra claiming he paid the Clintons millions of dollars to induce them to use the public influence in the U.S., Russia, and Kazakhstan to help him pull off a multi-tiered scheme to sell his Canada-based firm, Uranium One — which controlled one-fifth of all strategic U.S. uranium (used to produce nuclear weapons) — to a Russian company.

As the documents detail, Infowars notes, “from 2005 to 2013, the public record suggests Giustra was responsible for hundreds of millions of dollars in ‘charitable donations’ to the Clinton Foundation and hundreds of thousands of dollars to Bill Clinton in speaking fees that are suspected of violating numerous federal, state and international violations of the laws regulating the operation, administration and financial reporting of charitable entities.”

As has been publicly reported, the deal was finalized while Hillary Clinton was serving as President Obama’s secretary of state. The New York Times tracked the flow of money from wealthy donor/participants in the deal to the Clinton Foundation and the pockets of Bill Clinton himself — straight from Russia:

As the Russians gradually assumed control of Uranium One in three separate transactions from 2009 to 2013, Canadian records show, a flow of cash made its way to the Clinton Foundation. Uranium One’s chairman used his family foundation to make four donations totaling $2.35 million. Those contributions were not publicly disclosed by the Clintons, despite an agreement Mrs. Clinton had struck with the Obama White House to publicly identify all donors. Other people with ties to the company made donations as well.

And shortly after the Russians announced their intention to acquire a majority stake in Uranium One, Mr. Clinton received $500,000 for a Moscow speech from a Russian investment bank with links to the Kremlin that was promoting Uranium One stock.

One of the men at the center of the deal was Giustra. And as noted by Infowars, the history between him and Bill Clinton began back in 2005, in — of all places — Kazakhstan, home to one of the richest uranium deposits on the planet.

Clinton was there to hawk a Clinton Foundation initiative that enabled the government to buy low-cost HIV drugs at a time when the disease was virtually non-existent, with just 1,500 or so reported cases. As it turned out, the drugs were defectively made by an Indian pharmaceutical firm, Ranbaxy.

Giustra was there to see if he could obtain interests in some uranium mines. Mukhtar Dzhakishev, the president of Kazatomprom at the time — the government agency that operates the country’s uranium and nuclear industries — has said as a U.S. senator, Hillary pressed Kazakh officials to help Giustra make a deal.

Since then, Giustra managed to build a profitable company and sell it off to the Russians — all while donating tens of millions to the Clinton Foundation.

Lo and behold, none of this showed up on Mueller’s radar — or Comey’s for that matter.

The swamp is deep, broad and smelly. But those who inhabit it know all about self-preservation.