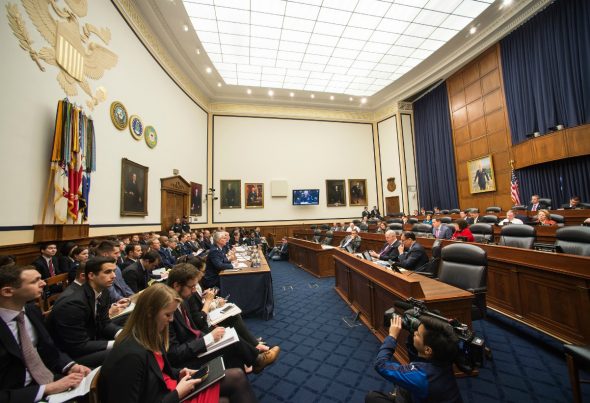 The U.S. national security apparatus grew so large after World War II that when President Dwight D. Eisenhower was set to leave office, he warned Americans about the growing power of “the military-industrial complex.”

That was January 1961, during Ike’s farewell address. The man who led America and her allies to victory over Nazi Germany, fascist Italy and Imperial Japan had witnessed the exponential growth of the U.S. security state, which was locked in a Cold War with the Soviet Union.

The ‘complex’ and the national security apparatus firmly attached to it has only gotten bigger and more powerful since, especially following the 9/11 attacks.

It is so large now and sucks up so many resources that the two congressional committees charged with oversight of national security agencies have had to hire scores of ex-spies and spooks, just so they can keep abreast of everything that’s really going on within the 17 designated intelligence agencies.

As reported by McClatchy papers:

Lawmakers assigned to oversee the sprawling U.S. intelligence apparatus rely strongly on a staff that in recent years has included scores of onetime spooks, analysts and lawyers who previously worked at the spy agencies under scrutiny.

According to a comprehensive analysis by McClatchy, at least one-third, and perhaps far more, of the professional staff members who carry out the work of the House and Senate intelligence committees are themselves veterans of the agencies that the two panels oversee.

That reliance raises questions about how effectively the two oversight committees carry out supervision of a swelling intelligence empire that now employs some 107,000 people with a combined budget projected to reach $78.4 billion next year.

Supporters say such a large, complex security apparatus is needed to thwart a repeat of Sept. 11, 2001. So far, such an attack has not been repeated.

But in the interim, we’ve had scandal after scandal involving spying on American citizens by the NSA, FBI and other agencies, as well as the politicization of the security state by former President Obama, who misused it to undermine the campaign of then-GOP nominee Donald J. Trump. Some say the security state — the Deep State — is continuing to undermine Trump even today.

And there is this, as McClatchy notes further: Many other areas of government are replete with watchdog groups and oversight committees. However, the security state operates on a long leash with deep pockets and very little oversight. The security state’s budgets — much of which are classified — are also not subject to outside audits, so it’s difficult, if not impossible, to identify and then rein in ineffective programs or legitimate misconduct.

“If you look at defense programs, there are all kinds of civil society groups that look for inefficiencies or waste or bad ideas and can shine some light on those inefficiencies,” Larry Hanauer, a security expert who was a staffer on the House intelligence panel from 2005 to 2010, told McClatchy,“There are no such entities that can do that when it comes to intelligence programs.”

While waste and fraud are important issues, the fact is most Americans are more concerned with a security state that infringes on their ever-shrinking privacy and due process rights. Seeing what the Deep State has managed to do to a duly-elected president leaves average citizens feeling small and completely powerless.

Since they’ve been formed, the security state has only gotten larger — and more powerful — and, as evidenced by Obama’s behavior and former NSA contractor Edward Snowden’s revelations, harder to ‘oversee.’ (Related: Why Isn’t Congress Investigating Obama’s Weaponization Of The U.S. Intelligence Community?)

Now here’s the really bad news: Don’t expect oversight of the U.S. security state to improve anytime soon. Budgets will grow, the numbers of employees will grow, capabilities will grow, and so, too, will the secrecy.

National security must necessarily be conducted out of the public eye; intelligence has to be guarded and thus limited to specific persons because that helps keep it safe from exposure to nation-state actors who wish to harm our country.

But the fact is, the security state apparatus has far outgrown Congress’ ability to keep adequate tabs on it, making it ripe for abuse and politicization.